Mental health, nature and me

Mental health, nature and me

An honest blog about how I helped myself recover, with the help of the natural world

And off to the forest I go, to lose my mind and find my soul
John Muir, American Naturalist

It is well known that mental health issues are increasing – one in four of people in the UK will suffer a mental health problem in a year and in England, one in six people report experiencing a common mental health problem, such as anxiety and depression, in any given week. I am a direct contributor to these statistics and I wanted to take some time to tell my story about what helped me through some of my darkest times.

The wonderful quote by John Muir, above, is one I heard just a few years ago and it really resonates with me.

I was having a terrible time then. I had had various diagnoses of mental health illnesses, depression, anxiety and bipolar from my early 20s and after struggling to access help, further meetings with psychologists and psychotherapists, borderline personality disorder was also added to the list. It was the proverbial straw that broke the camel’s back and I hit the deck like a sack of potatoes. I didn’t want to be here. I hit absolute rock bottom and I didn’t feel like there was any hope of feeling even vaguely ‘normal’ again.

As I battled with my own head and tried so very hard to not succumb to the very worst symptom of depression and borderline personality disorder, I found an unexpected source of relief – nature.

I was in such a bad way that existing was about the maximum I could cope with at the time. Normal activity, work, spending time with friends; it held no pleasure for me. To get me out of my bed and house, my father began taking me out, OS map under-arm, to simply walk.

We walked across meadows, woodlands, grasslands, through streams, stopping to marvel at the size of trees, at the greenness of the landscape, at the carpets of wild flowers that dazzled against the greenery with their bursts of multi-colour.

In autumn and winter, we took cameras out to capture the bleak and moody landscapes - I remember feeling at the time like it truly reflected what I felt on the inside – stark, bleak and cold, everything pulled back under the surface to hunker down and conserve energy for the next spring when life would once again burst forth with a zest for life that I was so lacking. I felt at one with the earth. It was like it understood me in a way no other being could.

As I began to walk more and more, these things of marvel and wonder, provided by nature, became my therapists, my listening ears, my witnesses as I began to slowly build myself back up. Slowly, slowly, I felt myself beginning to unfurl, like the first buds after a long, deep and dark winter, tentatively poking out from the darkness of underground to taste the air of another season. Slowly, oh so slowly, I began to look forward to getting out, I looked forward to the sense of peace I started to feel when I was out, away from urbanity, save the odd road we had to cross or the odd farmhouse we would see en route.

My Dad did the best to find walks off the beaten path, where I would find the inner sense of panic, an almost constant companion of many years, begin to fall away, like autumnal leaves slowly drifting to the ground, or caught in a gale and whipped away, out of sight, out of mind, distracted from those thoughts by the sense of connection to the natural world that I was forming.

I began tasting the wonder of nature in every way, savouring smells, capturing photographs in my mind’s eye for permanent storage, to use again when I was far from it but needed a reminder of the sense of calm and connectedness I felt when I was out in wild spaces. I started learning the names of wild flowers, of trees, of butterflies. I began learning the woodlands, I knew which trees felt like big protectors, whose shade cast by branches and leaves I could sit in, back against its grand trunk and take deep breaths to remind myself that all will, eventually, be well.

I can’t begin to tell you what an effect this had on my mind. As surely as the seasons change, I began to heal, on a deep and fundamental level. Outside, walking on this land I began to feel access into the corners of my mind that I had kept secrets hidden in, the parts of my mind that I had hidden the scariest thoughts in. I found that it could calm the racing heart, the torrents of lies that a mentally unwell mind will throw at you became increasingly a background chatter, no longer the thoughts that directed my behaviours and perpetuated a cycle of negative behaviours.

My whole life started changing, a direct result of this connection to nature that I had done my very best to ignore throughout my teenage years.

Nature healed me, it brought me back from the edge, from the dark, from decisions that would have had an impact on the rest of my life and the rest of my family and loved one’s lives.

Nature is our greatest healer and that is why I will always, always, go off into the woods, to lose my mind and find my soul. 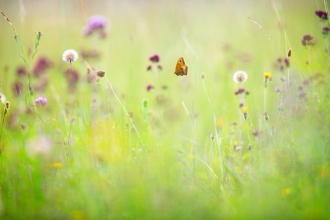 With more than 80 nature reserves, the Berks, Bucks & Oxon Wildlife Trust can offer something for everyone. See more about the best… 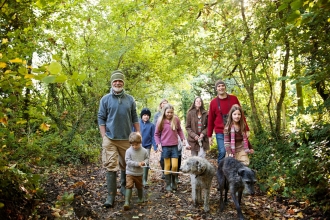 Enjoy a Wild Walk through our beautiful counties. All these circular routes take you through at least one Berks, Bucks and Oxon Wildlife… 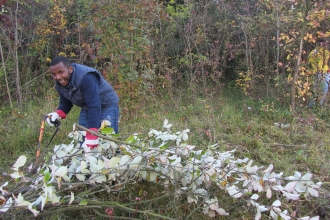 Whether you have just an hour, a day or a week to give, and whatever your skills, there’s an opportunity for you to volunteer with the Berks

What's the appeal of volunteering here? “Exercise, companionship, contributing to the sustainability of nature and wildlife and…

A walk at Chimney Meadows

Volunteer bird surveyor, Caroline Coleman takes us on a walk around Chimney Meadows as she records the birds she encounters

Setting up a volunteer group