https://twitter.com/bbowt
https://www.facebook.com/bbowildlifetrust
https://www.instagram.com/bbowt/
Hannah volunteered at BBOWT as a Wildlife Trainee (Conservation – Reserves Management) with the East Berkshire Reserves team based at Woolley Firs, Maidenhead, and Planning and Biodiversity Volunteer (Berkshire). She founded Wild About Datchet.
Counting eggs is the most reliable way to monitor brown hairstreak populations, but can be an arduous task given their relatively tiny size.

Dense, tangled and sharp, it’s hard to imagine that blackthorn is a sanctuary for any wildlife. Despite its hostile appearance, this deciduous scrub is a haven for creatures willing to seek refuge amongst its vicious thorns.

In Southern England, one butterfly species found among blackthorn hedgerows is the brown hairstreak.

From July until mid-September, the golden wings of this butterfly soar atop the high branches while it feeds off aphid honeydew.

In the winter months, its distinctive, white pin-sized eggs can be seen on young blackthorn shoots.

Once widespread across England and Wales, this butterfly is becoming increasingly rare. This species is suffering greatly from habitat loss as hedgerows across the country are removed and intensively pruned.

However, things might be looking up for the elusive brown hairstreak.

Organisations such as Butterfly Conservation have worked tirelessly to raise awareness of the needs of these vulnerable creatures. These butterflies are now recognised as a priority species and are a focus of Biodiversity Action Plans (BAPs).

Across the country, more and more land owners are beginning to manage hedgerows in a wildlife-friendly way.

But are these actions making a real difference to butterfly populations?

This week, as part of an ongoing collaboration with Butterfly Conservation, a handful of trainees set out to look for brown hairstreak butterfly eggs at BBOWT’s Asham Meads.

The hedgerows of this Oxfordshire nature reserve are carefully managed in coppicing rotations, yielding young and regenerating blackthorn for brown hairstreaks to lay their eggs. This also leaves in place older blackthorn trees, providing habitat for the black hairstreak butterflies.

Counting eggs is the most reliable way to monitor brown hairstreak populations, but can be an arduous task given their relatively tiny size.

Fuelled by optimism, coffee and biscuits (and perhaps some of us by a competitive streak…) we began our search. I was one of the lucky ones, almost immediately finding an egg on a young tree.

After searching in the cold all morning we were rewarded for our hard work.

The total egg count for Asham Meads had almost doubled since the last survey in 2016. We still have a long way to go, with the number of eggs counted just under half of those recorded when the survey began 2010.

Nevertheless, we went home with smiles on our faces – positive results, no matter how small, are a rare treat to be enjoyed.

Plus, there is more good news as survey groups across Southern England are also reporting good numbers of brown hairstreak eggs.

We live in hope that the brown hairstreak populations will recover.

Whilst we will continue to help these butterflies through habitat restoration, some factors are more difficult for us to control.

Temperature changes brought about by climate change may prove one of the biggest threats to these rare butterflies.

Harsh winter conditions are best for brown hairstreaks as their eggs are more resilient than the parasites that prey on them. As winters are becoming milder, so the survival of parasites increases.

It is tempting to speculate that that the increased egg count seen this year may be a result of the harsh conditions brought by last year’s ‘Beast from the East’ in and the favourable summer weather during the butterfly’s flight period.

While it is impossible to predict the future for brown hairstreaks, today’s results offer us a glimmer of hope. With 2019 looking promising for these rare butterflies, why not try and catch a glimpse of them yourself? Brown hairstreaks are on the wing from July to mid-September and can be found at other BBOWT sites such as Upper Ray Meadows and Bernwood Meadows.

All you need is your binoculars (and perhaps a bit of patience)!

Where to see brown hairstreak butterflies in summer 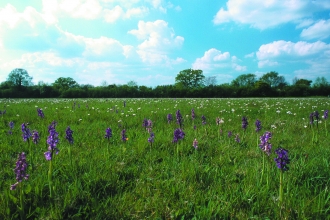 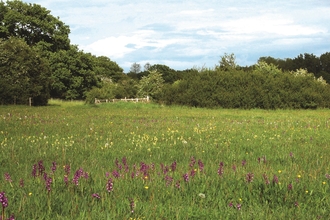 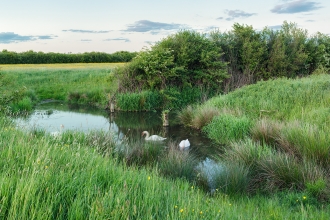 The River Ray is one of the best areas in central England for locally scarce wading birds. The first curlew usually return to the Upper… 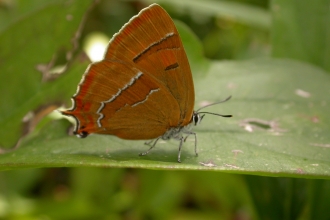 The brown hairstreak is an elusive butterfly that spends much of its time in the treetops feeding on aphid honeydew. It is found in… 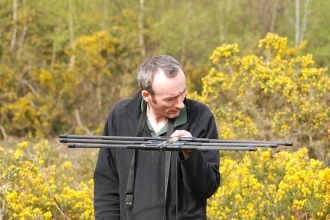 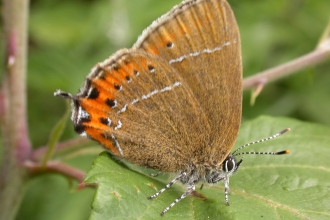