The Linking the Landscape Project completed in January 2019. Made possible by a grant from the Heritage Lottery Fund, the project focussed on the nature reserves and wider countryside of the West Berkshire Living Landscape, with people and wildlife at its core.

Its aims were to inspire residents to make strong links with their natural heritage and to reconnect broken links in the landscape in order to create vital corridors and stepping stones for wildlife.

Over the course of the project some 450 volunteers underwent training, contributing more than 5,000 days of their time. Volunteer time was boosted by 22 Conservation Trainees who between them gave an average of 369 days a year to the project.

More than 70% of the volunteering days were used to carry out practical conservation tasks. Many of our volunteers continue to volunteer with us.

Find out more about volunteering

Landowners were helped with writing and delivering management plans to improve and restore habitat on almost 10ha of land. Volunteers were also granted access in order to complete regular surveys to establish the health of the landscape and assess the impact of our work.

By modelling the potential for habitat connections we were able to focus our work to ensure the most effective gains for wildlife. Work included creating new glades, rides and coppiced areas within woodlands, clearing old gravel extraction sites of encroaching willow, and cutting and raking areas of grassland. Trees overshadowing waterways were managed to let in more light, and islands cleared to create safe breeding sites for wetland birds.

All that hard graft has paid off.

Three tern rafts were colonised within weeks of deployment, culminating in the successful rearing of chicks.

Clearing two islands of over-grown vegetation provided habitat for breeding oystercatchers, which successfully bred in 2016 after many year’s absence.

Scrub clearance from half a hectare of reeds has brought a Site of Special Scientific Interest back into healthy condition.

Habitat management work was carried out on Crookham Common in response to a commissioned report on breeding lapwings, with sparse willow and birch scrub cleared to restore an area of open gravel that had at one time been a site for breeding lapwing. Subsequent to this, and following additional clearance, Lapwing once again bred on the site in 2019.

The project has made a measurable difference to both the area and connectivity of key habitats in West Berkshire.

Our experiences were presented to 27 other conservation organisations in a workshop designed to share best practice in landscape-scale monitoring of wildlife and natural systems.

Find out more about our work beyond our nature reserves 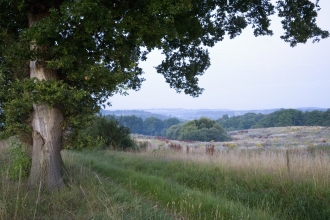 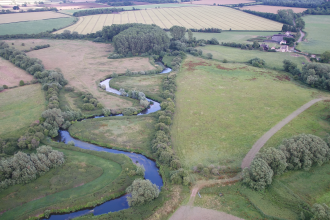 The floodplains of the upper Thames tributaries make up one of the six best wetland areas in England. 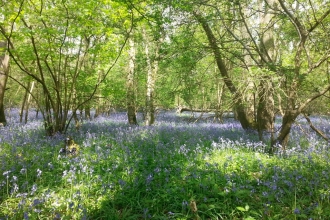 This large area between Oxford, Bicester and Aylesbury covers 48,400 hectares of woodland, mixed farmland and floodplain meadows across…

The Linking the Landscape project was funded by Heritage Lottery Fund.