Greenham and Crookham Commons form the largest continuous tract of open heath in Berkshire. It is special for the mix of purple and pink heathers and golden yellow gorse, wildflower-filled grasslands and expanses of bare gravels - all easily accessible to visitors.

There are a wide variety of routes – The main tracks across the common are level and accessible for those with limited walking ability, cyclists and horse-riders. Other waymarked routes are colour coded and cross varying terrain.

The main tracks across the common are level and accessible for those with limited walking ability, off-road bicycles and off-road mobility scooters. Other waymarked routes are colour coded and cross varying terrain.
Undulating wooded valleys with uneven terrain including steps. Most entrances have 1.5m bridle gates. Height barriers on minor car parks, main car park accessible to larger vehicles or those carrying cycles on the roof.

The Common is open at all times.

For information about the cafe opening times, see below.

Please note: the carpark is likely to be busy on Saturdays due to the Park Run.

If you are attending the Park Run, please be aware that although we do not charge for the car park we welcome donations which allow us to maintain the site and keep it accessible for such activities to take place.

These commons are at the heart of our West Berkshire Living Landscape which covers more than 27km2 of lowland heathland, ancient woodland, reedbeds, rivers and streams. Greenham and Crookham Commons on the southern edge of Newbury forms the largest area of lowland heath in West Berkshire – a fragile and threatened habitat full of very special wildlife – and is particularly important for some of Britain’s rarest ground-nesting birds, including nightjar, woodlark and lapwing.

History of Greenham and Crookham Common

The Commons have a rich history. The heathland is on top of a flat gravel plateau laid down at the end of the last ice age, and since then its use has been many varied, feeding pre-historic hunter/gatherers, used as common land by farmers, and later gaining significance as a military air base.

General Eisenhower watched some of the 10,000 sorties flown during D-Day from the nearby Greenham Manor. At the start of the 1980's, nuclear cruise missiles were stored at the base. The demonstrations against these made regular headline news and galvanised the start of the Peace Women movement in 1981. One mass protest called 'Embrace the Base' saw over 20,000 women joining hands around the perimeter of the airbase.

After decades of military occupation the Commons were officially reopened for public use on 8 April 2000, thanks to a partnership between the Greenham Common Community Trust and the then Newbury District Council (now West Berkshire Council).

This is the largest single area of lowland heathland remaining in Berks, Bucks and Oxon, and since 2014, BBOWT has been managing the Commons on behalf of West Berkshire Council; working to protect this site for everyone to enjoy.

When conditions are right, Greenham Common is host to a late-summer wildlife spectacle as hundreds of autumn lady's-tresses orchids flower.

The best spot to see these beautiful snow-white flowers twirling around soft grey stems is on the short dry turf 100m east of the Control Tower car park. From late afternoon the tiny flowers waft a soft, coconut fragrance. Tread carefully or you’ll squash them!

Heathland habitat is ideal for certain species of birds because of its open nature, with just a few scattered trees and bushes for them to use as singing posts or look out points. It is also relatively warm and dry and has an abundant food source in the form of invertebrates. You may be lucky enough to hear the rich and varied song of a nightingale, or the warbling call of a skylark high in the sky.

In summer, the heath comes alive with over 30 species of butterflies including the small blue and the expertly camouflaged grayling. They are joined by dazzling displays from damselflies and dragonflies, all set to the unmistakable music of grasshoppers and crickets.

Explore part of the West Berkshire Living Landscape on our two Wild Walks, both of which pass through Greenham and Crookham Commons.

West Berks Walk Two: Walk along the River Enborne, through woodland and pastures. Starting at Thatcham railway station, this 6-mile circular walk takes in part of of Greenham and Crookham Commons.

There is a café on the site run by Greenham Common Control Tower. Please visit their website for information on access and opening times.

If you have any concerns about the cattle at the Greenham end of the Common, please contact the farmer on 07983 078793. For cattle at the Crookham end, please phone West Berkshire Council on 01635 42400. They will pass a message to the farmer.

Greenham and Crookham Commons are managed by the Berks, Bucks and Oxon Wildlife Trust on behalf of West Berkshire Council. 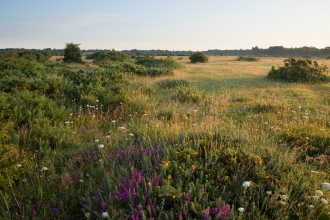 Less than a mile away