A rich array of chalk grassland flowers and insects in an undulating landscape.

The Ridgeway National Trail passes through the reserve.

Sloping, steep and muddy in places. Kissing gates. Some stiles.

In the recent past

Grangelands and ‘the old Kimble Rifle Range’ lie across undulating land at the foot of the Chilterns scarp. The lower slopes of this ancient, flower-rich grassland were ploughed up during World War II when there were food shortages and more land was needed to grow crops. But the thin soils caused an almost complete crop failure and it has reverted to grassland and become recolonised by many interesting plants and butterflies. The Rifle Range, now rich in orchids, had a short history as a practice range in the 1940s to the early 1970s by the British Armed Forces, as an officer training centre and home guard post. This reserve was managed by the Trust in the 1950s for 40 years, (then known as BBONT – the Berks, Bucks & Oxon Naturalists’ Trust), and was an educational resource for adult education, naturalists and botanists. In 2015 the Trust took on the long-term management of the site, on behalf of Buckinghamshire County Council.

The site is known for its rich mix of chalk downland plants. The summer is the time to see the impressive display of wild orchids across the site. Pyramidal, chalk fragrant-, common spotted- and bee orchids are all found here. Sit a while on the slopes, enjoy the wonderful views, and breathe deeply to take in the pungent scents of wild thyme and marjoram. The bright yellow clusters of flowers at your feet are common rock-rose, a low-growing, creeping, evergreen shrub that likes sunny chalk grassland. Flowering from June to September, common rock-rose provides plenty of nectar for various bees and is also the foodplant of several species of butterfly such as the brown argus and green hairstreak. The vibrant hues of gentians, horseshoe vetch, harebell, deadly nightshade and hound’s-tongue also grace the slopes. This diversity of flora in turn leads to a great diversity of invertebrates – including many of our most beautiful and rare butterflies.

A procession of butterflies

Butterflies can be seen on the grassland throughout the spring and summer months. Brimstones are the first to emerge from hibernation on warm days in February and March, followed by peacock and small tortoiseshell. In the summer common blue, marbled white and chalkhill blue emerge. The chalkhill blue is limited to this type of habitat as it lays its eggs only on horseshoe vetch. It is our second largest blue butterfly and the males can be seen flying low over the vegetation. The grassland is also home to populations of glow-worms and the Roman snail, our largest European terrestrial snail.

The wide expanse of dense and scattered scrub flanking the neighbouring wooded scarp at Pulpit Hill provides an abundance of cover for both breeding and overwintering birds. Listen out for the yaffle of green woodpeckers as they fly between the yellow meadow ant nests which they are raiding. Further down slope yew, ash, whitebeam and wild cherry occur among the beeches, accompanied by a greater variety of shrubs including blackthorn, hawthorn and buckthorn. These lower slopes are also home to a large number of junipers (a species which has been declining for at least 50 years). In among the woodland you may discover white helleborines and the bird’s-nest orchid, so named because of its mass of peculiar, short, thick roots said to resemble a bird’s nest. Nearby, on the other side of the bridleway to the reserve is Happy Valley, containing Britain’s largest stand of native box woodland.

The ancient and well-trodden Ridgeway National Trail passes through Grangelands and The Rifle Range. Walkers, horse riders, cyclists and others can enjoy attractive countryside stretching for 87 miles over the Chilterns and North Wessex Downs. The route takes visitors to prehistoric hill forts, enigmatic chalk figures, flower-rich grasslands, stunning viewpoints and beech woodland. For more information about the history and wildlife of the route, events, holiday planning, circular walks and more, visit www.nationaltrail.co.uk/ridgeway. 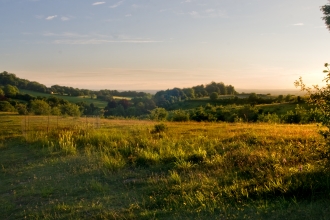 Juniper and Other Wildflowers at Grangelands

Grangelands and The Rifle Range,

Grangelands and The Rifle Range,