As spring unfolds at Warburg Nature Reserve, Kelly looks back at the succession of plants and animals appearing through the season.

Since February, colourful signs of spring have been popping up all over Warburg Nature Reserve, nestled in the Chilterns near Nettlebed.

First, the green hellebores (Helleborus viridis) made an appearance along the track. A count of these by one of our volunteers recorded over a thousand in one patch alone!

Next, a sea of snowdrops (Galanthus nivalis) welcomed visitors to the reserve as they arrived at the car park – another sure sign of spring. As early flowers, they are important source of food for insects such as flies.

The hazel (Corylus avellana) all around the reserve has been covered in yellow catkins, these are the male flowers and appear before the leaves, hanging in clusters from mid-February. Hazel is 'monoecious', which means that both the male and female flowers are found on the same tree, so keep an eye out for the more inconspicuous female flowers too. These are bud-like with tiny red styles peeking out. The more female flowers, the more chance of a good crop of nuts at the end of the summer!

The flowers of the evergreen, leafy wood spurge (Euphorbia amygdaloides) have also been emerging across the reserve. It is the ancestor of our garden varieties of Eurphorbia (spurge). The attractive greeny-yellow flowers can be seen usually from April to June, although have been early this year thanks to the milder weather.

The drab looper moth (Minoa murinata) – a day flying moth, chooses wood spurge as its larval foodplant and can usually be seen on the wing between May and June.

The volunteers have been very busy again, racing to finish scrub clearance before the end of the season. They have done a fantastic job tackling dogwood and bramble in many areas, including up at Freedom Wood, hopefully encouraging more chalk species to thrive on the grassland and creating a varied age structure of scrub that should appeal to a wider variety of species.

It was up there on 13 February in that unusual warm week that I saw my first brimstone butterfly (Gonepteryx rhamni) of the year.

The odd bumblebee has also been spotted bumbling around as the weather warms up. These will be last year’s new queens who have hibernated over winter after mating, coming out to take advantage of early spring nectar sources and ready to find a suitable nest site and lay their eggs, starting their new colony!

By now, all the birds are singing to each other across the reserve, and great-spotted woodpeckers are drumming from afar, all in an effort to find a mate. Returning chiffchaffs (Phylloscopus collybita) can be heard, and the tits can be seen flitting in and out of hedges and nest boxes carrying nesting materials.

We have set up a nest box camera so hope to be able to show visitors the birds nesting, hatching and feeding their young.

A carpet of dog’s mercury (Mercurialis perennis) covers the floor of the woodlands, an ancient woodland indicator with small greenish flowers, interspersed with bluebell leaves – the next spectacle the reserve eagerly awaits! 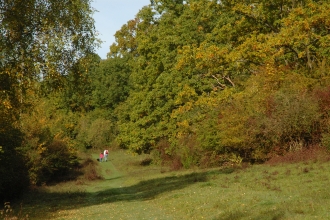 A hidden wildlife gem nestling in the Chiltern Hills, rich in wildlife that will lift your spirits whatever the season. 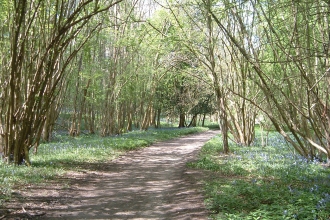 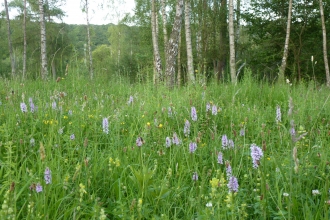 An opportunity to carry out practical conservation tasks on this varied nature reserve nestled in the Chilterns near Henley-on-Thames.…

What's on at Warburg Nature Reserve

Bluebells at Warburg by Rachel Hudson