Taking a closer look at your local green space can help to add a sense of connection, which also improves our wellbeing. Katie Horgan and her 'Rough around the edges' volunteers did just that.

We are all starting to emerge from the most recent Covid restrictions and spring is slowly (and coldly) peeping over the horizon.

The Rough Around the Edges project is becoming a busy place as online meetings, webinars and catch-ups begin to move outside. It seems as if people are beginning to feel able to be outside and active again, or at least to make some plans for things that they can do for wildlife.

I think for most of us, certainly for me, these are as much actions for me, for us, as they are for our wild neighbours. I am conscious that many people need reconnection with who they are, who their friends and neighbours are (human and non-human), and that they find this reconnection by being in open, green, wild, natural spaces.

This connection happens in many ways because it isn’t simply about direct connection with nature, it also about connecting with each other through nature.

A couple of small groups of us have been out learning a little about how to spot and count plants in local places (in other words doing some basic surveying).

I planned the sessions with an assumption that this was something people hadn’t done before. We took some time to simply look at the site and try to decide how much different habitat we had – what percentage was trees, grass or wet ground, for example. Of course, there was no accurate answer we could give on the spot.

We did the same for small patches of ground and we counted how many different plants were in those small patches. Some people came with great plant knowledge and could identify them, while others couldn’t name the plants but they could spot the differences.

We spent some time talking about what we were observing, finding out that perhaps we ‘counted’ or estimated differently. I also realised that even spotting the difference between plants (especially with so few flowers out yet) can be tricky.

We found on both sites that a closer look at a small patch reveals more than just the grass we initially think is there. Close up, these patches held mosses, daisies, dandelions (who knows which ones!), selfheal, speedwells, tormentil.

These are discoveries in many ways. For some people, there was the discovery that they did actually know some plants. For others, it was that grass and moss have their place too and the world of the wild is not all about the flowers.

I think we also rediscovered the pleasure of being outside with a few other people and being able to chat with them. We found out who knew some stuff about plants and who didn’t,

I found out who was very happy sitting on the ground and who was less comfortable with that. I noticed that a couple of participants really focussed on colour when they were looking around them.

We all discovered, I think, that we needed a little time to really look at the sites - ‘to get our eye in’.

I think everyone discovered something new about the places we were in, and I’m very sure that for some participants it was a sense of connection to that place, somewhere that for many of them they knew very well as it was a place on their doorsteps.

I’m sure of this because after both sessions we talked about ways in which we could give this new sense of noticing and seeing all the tiny secrets in a patch of ground to other local people, to pass on the sense of it being a special place that they are connected to.

Go outside for a walk or explore your nearest nature reserve

With the people around you, share your wildlife experiences

Of the everyday wildness on your doorstep

Try something new outside

I can see the five ways to wellbeing being, listed above, in this activity and in the other work groups are doing in their local spaces, with the support of the Rough Around the Edges project.

People connect to local spaces by actively noticing and giving something to those spaces – that giving seems to be both for wildlife and for people.

More ways to get connected to nature 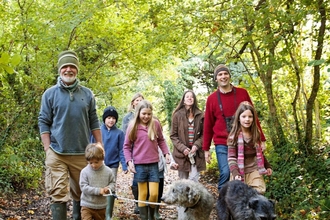 Get out and find a nature reserve near you 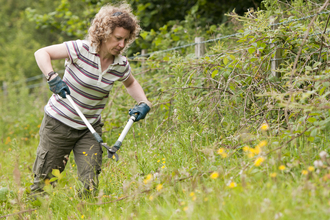 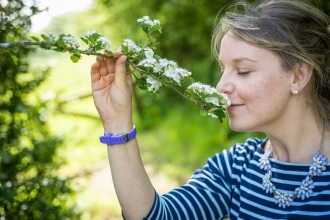 Let's go on a minibeast hunt

Take a closer look at the tiny creatures all around us. These ten insects can be seen in parks, gardens and green spaces during June, if…

The Seasonal Wardens update on the rare breeding birds at Greenham and Snelsmore Commons, and how they've been working to protect…