The BBOWT team tell us about their favourite spots and what makes them so special. This month: The Frozen Dragon Tree

In this blog series, members of our team share a photo of their favourite spot on our reserves, and tell us the story behind it: what makes it so special, and the work that goes in to maintaining it. There’s always more than first meets the eye!

This month Andy Gunn tells us about the Frozen Dragon Tree at Chilswell Valley.

JM: Can you start by telling me about Chilswell Valley?

AG: It’s just to the west of Oxford and it’s quite special. You walk up the hill from the A34 and you come to this unexpected little nature reserve which has a real effect on people I think. People really do feel far away from Oxford, even though you can still see the city if you look behind you. It’s a designated Local Wildlife Site because it’s got some pretty amazing old calcareous fen, and there’s also some really nice limestone grassland and amazing magical woodland.

For me in a personal sense, it’s the place that I go for my nature therapy. If I’m feeling a bit low I know that a walk through there usually helps me, it’s my thinking space. It’s a very special place for me and I’m very lucky to be able to work there and enjoy it as well.

What’s wonderful about Chilswell is that there’s always something there that you haven’t noticed before. That’s part of the spiritual thing for me too - my mind is always active when I’m walking through because I’m always looking around. I think a lot of people have learnt during lockdown that you can see more locally and you don’t have to go on great big journeys to far off places to see amazing things.

JM: Tell me about the dragon tree!

AG: The first time I saw it, I just thought it was a really incredible feature that I hadn’t seen that much around, it looks as though it’s just collapsed but it didn’t ever snap. And straight away I thought what an amazing thing for kids to see. So whenever we do walks up there with families and things I always show the kids the tree and tell them it’s a frozen dragon because it’s got this really amazing hunched back.

JM: Which end is the head?
AG: I think the beauty of that is you can say whatever you want, it’s all in your imagination! That’s the message that I like to get across to kids – when you’re walking through a wood you can use your imagination to think about what animals trees look like, things like that. My ‘old person’ imagination can only go as far as a dragon, I bet kids would come up with much better things!

It’s an ash and I’d say it might be about 70-100 years old, as an estimate. One of the reasons I’m particularly interested in it is that I don’t think it’s that common for ash to bend like that without it snapping. So I suspect when it was quite young, something was restricting it and it’s managed to grow within that structure. Perhaps there was a bigger tree that bent it over and then maybe that bigger tree was cleared or has rotted away, and it’s manipulated itself into that form.

It’s been forced into that position and then kept on growing - there’s definitely a metaphor in there somewhere. But in terms of management of woods, there’s something to be said for allowing them to form their own character without interfering too much. If you were looking for a really tidy woodland, which is something we’d never want, this tree is something that might have been cleared.

JM: So where on the site is this tree?

AG: When you enter the site, first you go along the boardwalk and through the calcareous fen, and at the end you’re confronted with the amazing bent over ash you see in the photo.

As you walk beyond that tree you’re transported into a really different world. It’s like a gatekeeper, because it's quite sudden. that transition between open fenland and a really dark and spooky wood full of lovely old oak, ash and hazel, I think it’s quite magical. I don’t think there’s anywhere else in this area, certainly directly around Oxford, where you get that experience, of feeling far away from everything else.

JM: Can you walk us through the different habitats you mentioned on the site?

AG: When you go in along the boardwalk there’s quite a lot of tall reeds. Walking through there in the summertime you might hear warblers and there’s a good population of reed bunting there which is amazing, and you might hear buzzards and kites above you. Walking through the reeds I like hearing the sound of them in the wind - even if it’s just a very light wind, you still hear it.

Then you come to the fen area we’ve been restoring, and in the summer you’ll see all sorts of amazing fen plants. Before we cut any of the reeds I think there were four species of plants, and there are now over 50 which is amazing. They’re really specialist plants as well, like orchids, some grass-of-parnassus there this year, bog pimpernel. That habitat is often overlooked because people don’t realise how special it is. They say there are 18 hectares left of calcareous fen left in England, so that there is quite a chunk of it!

Once you’ve gone past the dragon tree in the photo you come across these really big old oaks. A lot of them have died now – you know what they say about oaks, they live for 200 years and then die for 200 years as well, so they’re really significant when they’re decaying. You’ve got these wonderful old stag-headed oaks poking their way out of the top of the canopy.

It’s amazing, you can stand by one of those old oaks for hours and just watch all the things that are going on in the tree, nuthatches, the squirrels bobbing about all over the place. Also if you go a little bit further along there’s a really nice old dead tree that’s had woodpeckers nesting in it for the last three or four years, so I’ve often gone and listened to them. If you’ve ever heard the young calling the adults, it can only be described as a din! It’s an unbelievable amount of noise.

A little further along there are really large ash trees that look like they might be along an old boundary because they’re triple stemmed - possibly this woodland was coppiced previously. In the top of those trees there’s a rookery as well so in the summer you’ll hear them clucking above you. There’s also lots of hazel coppice in there.

JM: How long have you been working on this site?

AG: Chilswell Valley is owned by Oxford City Council and we’ve been working there as part of our Wild Oxford Project for about six years now. The fen habitat had not really been identified as special previously, so that’s part of the reason we came in.

JM: So how did you manage to identify this special habitat?

AG: We worked with local ecologists who had been working at Lye Valley, another fen in the city, a really good example of a fen that’s been managed over time.

The indicators for calcareous fen are springs coming out of the limestone. For this specific habitat the springs need to be tufa depositing. Where water has travelled underground it’s trapped in aquifers and released slowly over time, and leaves kind of limescaley deposits on the ground, which are a sign of these tufa depositing springs.

We found a few of those in the valley so we were fairly confident that it was the same, and then we started to do some samples of the water and the particular species that were there already which confirmed it.

Lye Valley Fen then became the donor site for part of the restoration of the fen. We took some green hay – basically waste product from Lye Valley, and spread that on Chilswell. After a few years the seeds from that started to take hold, and that’s part of the reason we’re getting so many species back. It really does work. It’s a beautiful little cycle.

JM: What’s going on at Chilswell Valley and how can people get involved?

AG: We’ve had all sorts of events over the years - night safaris, family days, we actually had music once, did egg rolling down the hill, things like that. Volunteers come there as well, there’s a work party on Mondays. Plus we’re always looking for people to help with other things – for example people can help with butterfly surveys, it’s a good site for brown hairstreak. And we’re always interested to hear about people’s observations as well, if people would like to send them in!

Andy Gunn is Project Officer for the Wild Oxford Project, a partnership between BBOWT, Oxford City Council and local community groups to create a more resilient network of wildlife habitats across the city, benefitting Oxford’s natural heritage and improving people’s access to nature. Chilswell Valley is open to the public and there’s lots to see year round! 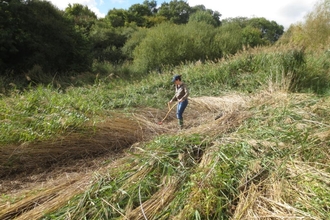 An opportunity to carry out practical conservation tasks around this nature reserve near Oxford. This friendly group meets once a month… 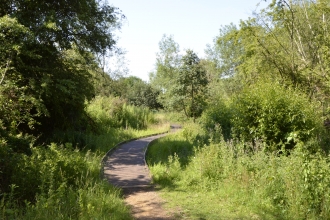 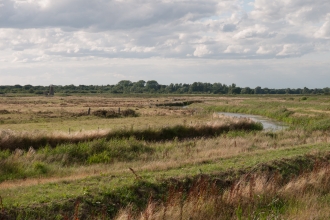 Water-logged and thick with reeds and robust tall-herbs or tussocky sedges, fens are evocative reminders of the extensive wet wildlands…

Fun things to do at your local nature reserve

Our wonderful supporter Aoife (9) shares all the fun things she's found to do at the C.S. Lewis nature reserve with her mum Imogen…