This tranquil haven with a rich variety of wildlife includes the beautiful Pavis Woods - just perfect for recharging the batteries!

Park at the water works

Footpaths and bridleways pass through the reserve and there is a 0.5 mile Wildlife Walk

Woodland haven
Variety is the spice of life in this wonderfully mixed reserve which nestles within two sheltered valleys deep in the Chilterns. Dancersend, once owned by the Rothschild family, was made a nature reserve in the 1940s in remembrance of Charles Rothschild, the founder of UK nature conservation.

Dancersend's different types of woodland habitats reflect a chequered history. Most of the original woodlands were felled during the Second World War, but in the 1950s, two large woods were replanted with mixed woodland including beech, ash, cherry and oak.

Now maturing, these woods have stunning displays of spring flowers. You can also find a number of old woodland plants including the white hanging bells of Solomon's-seal and the unusual winter-flowering stinking hellebore.

The sounds of birds
The woodlands are home to many birds. Listen out for the drumming of the great spotted woodpecker and the 'yaffle' of the green woodpecker. Tawny owls can be heard hooting in the trees and the 'pitchou' call of the marsh tit is commonly heard.

Chalk specialities
Between the woods a series of grassy clearings were rescued from scrub in the 1970s and have become a haven for butterflies and other insects. Today, delicate fly orchids and spectacular greater butterfly orchids flower here. In the largest area of chalk grassland, careful management over the years has enabled orchids to grow alongside the delicate Chiltern gentian and rare meadow clary. As part of a WREN-funded chalk-grassland project we have re-seeded 6.5 hectares of land to the west of the reserve, using a bespoke seed mix based on flowers already found on the reserve.

We have also created several large scrapes to provide bare chalk for early colonising species such as Chiltern gentian, kidney vetch and horseshoe vetch to flourish. In turn, these flowers will eventually provide habitat for butterflies including the rare chalkhill blue and small blue.

Seasonal wildlife
In spring, there are carpets of bluebells in the woodlands. At the clearings and woodland edges, primroses and cowslips flourish. You can also find wood vetch here, the only place in Buckinghamshire where it grows. In spring and summer, these sheltered sites encourage a range of butterflies such as dingy and grizzled skippers, chalkhill blue, silver-washed fritillary, marbled white and meadow brown.

Autumn brings a large number of fungi, including the amazing collared earthstar whose outer layer splits and folds backward into a star-shaped pattern. Another interesting species to spot is the scarlet elfcup which you can find on rotten moss-covered twigs in winter and early spring.

Pavis, Northhill and Black Woods
In 2015 the Trust took on the long-term management of Pavis, Northhill and Black Woods, collectively known as Pavis Woods. It is 35 hectares of mature beech woodland, scrub and more recently planted woodland, lying on the steep scarp facing Dancersend. Within this part of the reserve look out for the old boundary trees with extensive root networks and patches of wych elm and hornbeam, in spring, enjoy the birdsong as chiffchaffs return to nest. Rich in archaeology, in Pavis Woods you can find sunken tracks leading up from the valley onto the higher ground at the top of the site. There are many marl pits, and saw pits showing that humans were constantly working this landscape in the past and the bank and ditch boundaries of three parishes can be traced through the woods. The Ridgeway National Trail passes through this part of the reserve. 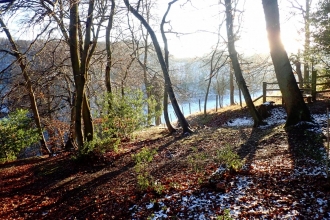 Our volunteers help us in so many ways - by working on nature reserves, helping at visitor centres, leading walks, training others and much, much more. Without our volunteers we would not be able to carry out much of our work.

For more information about volunteering for BBOWT, please get in touch with volunteering@bbowt.org.uk