Why conservationists cut down trees

It’s winter, and the seasonal work of The Wildlife Trust’s North Bucks reserves team and its loyal band of volunteers has shifted from the fencing, hay cutting and bird hide repairs of summer and autumn, to the felling, cutting and burning of winter.

But why would BBOWT, a charity committed to the protection and preservation of wildlife, be cutting down trees on its reserves?

This seemingly destructive work may appear contradictory to BBOWT’s values at first, however, it forms an essential part of the work undertaken by the Trust in supporting wildlife on its reserves. And here’s why.

Coppicing is the ancient practice of cutting down trees to ground level to stimulate increased regrowth and has been employed throughout history for the purpose of maximising timber yield from an area of woodland to produce charcoal and building materials.

By cutting trees and shrubs down to their base it forces the remaining stump to direct its energy into sending out multiple new shoots. These shoots are then left to mature to a point where multiple stems can be harvested from one stool thus increasing the volume of timber that could be extracted from each individual tree.

These days, coppicing is most commonly employed as a conservation technique. The rotational cutting of the woodland understory creates a diversity of age structure, which helps support a whole host of different wildlife.

A prime example of this is the coppice coup recently cut out of Rushbeds Wood. Roughly 50x50m, the cutting down of almost all the trees in this area would appear at first glance downright destructive, but a closer look reveals a very different story.

The thinning of the canopy allows more sunlight to reach the woodland floor, presenting an opportunity for wild flowers such as bluebells, dog violets and yellow archangels, which had previously been starved of light by the taller, more dominant trees.

These wild flowers will go on to support various woodland butterflies that can be found at Rushbeds Wood including silver-washed fritillary, white admiral, and the rare and elusive purple emperor.

The coppiced trees will over time regrow, forming a habitat that will continue to mature and change over the years until it is re-coppiced, thus creating a continually evolving patchwork of shade, light and varying brush density allowing a mosaic of niches that many different species can exploit.

This regrowth forms the dense understory needed by nesting birds such as willow warblers and chiffchaff.

The felled material can be left in log piles which, as they rot, provide a platform for a multitude of fungi, lichen, mosses and invertebrates, the latter of which in turn supports birdlife and small mammals.

Suddenly an area of woodland dominated by high numbers of a handful of species can be home to many different species and the biodiversity of that same area is greatly improved.

This blog is intended to present the benefits of cutting down trees in the name of wildlife and, hopefully, explains that while the work we do as conservationists can often appear destructive; it is all in the best interest of the wildlife we strive to support.

Find out more about Rushbeds Wood 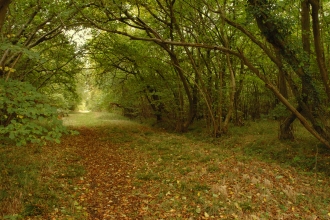 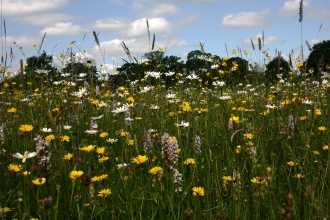 An opportunity to carry out practical conservation tasks around this nature reserve near Brill. This friendly group meets on the first…

How Chimney Meadows plays an important role in preventing flooding

Nature reserves on floodplains play an important role in preventing flooding downstream, as well as providing homes for wildlife