After an energetic and industrious two months of woodland work, the Finemere Wood volunteers are once again in hibernation. Staff and key volunteers, such as myself, are out in the wilds tackling only the time-critical essential tasks in this second national lockdown.

Much has been achieved during September and October. Work parties have been small in size due to Covid-19 restrictions, but they have been more plentiful and the volunteers have been on tip-top form. The eastern ride has received an abundance of attention.

Three 'scallops' along the woodland edge have been cleared of scrub and trees. These lay-by shaped areas will allow sunlight to hit the ground, resulting in fresh, new growth. These open, but sheltered spaces, right on the edge of the wood, are so important to the survival of invertebrates, and in particular to butterflies.

And now I turn my attention to a species I haven’t yet focused upon in my writings, the woodland workers. Who are they, and what motivates them?

First and foremost is Pete, (BBOWT’s North Buckinghamshire Reserves Officer) who oversees all we do. He has a calm and reassuring presence and approaches his work with creativity and zeal.

Returning from Australia, where he worked in a cafe whilst assisting research into marine micro-plastics, Pete joined BBOWT as a Conservation Trainee in 2017. This being a voluntary role, he took on a job alongside, on a smallholding where he chased sheep, made cider, and managed hedges. He thrives in the outdoors, has a thirst for knowledge of the natural world and is passionate in his support for nature.

His favourite Finemere activity? Spending time with the volunteers, absorbing their wisdom and wit, which he says is hard to beat.

His favourite Finemere species? The silver-washed fritillary, watching their flirtatious dogfights along the main ride.

Taking the trainees out chainsawing, watching them conquer nerves as they develop their skills, is an aspect of Pete’s work he enjoys the most. Seeing the threat that nature faces is a challenging component of his role and his hope that “we find a way to put nature first on a national and global level” is shared by many of us in the wood.

Outside of work, Pete likes to read, walk, cook, and drink big dark red wines and tends to holiday in nature reserves. He suggests he is rather boring. Nothing could be further from the truth, as is illustrated by my final request for information, to share something with me that not many people know about him: “I once helped to organise, and participated in, a 24 hour game of underwater Twister. I guess that’s what happens when a bunch of scuba divers drink beer and wonder what’s possible!” Crazy? Yes! Boring? No! 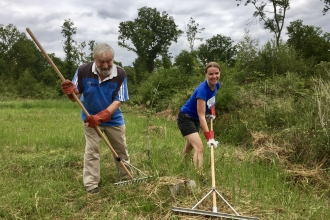 An opportunity to carry out practical conservation tasks around this nature reserve near between Bicester and Aylesbury. This friendly… 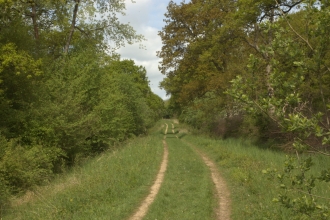 A magnificent woodland - home to birds, bats and butterflies, where you can forget the stresses of everyday life. 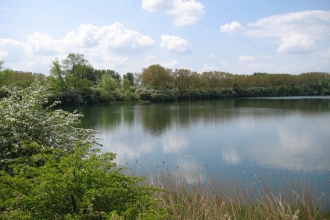 An opportunity to carry out practical conservation tasks on this wetland nature reserve near Bicester. This friendly group meets on the…