All about Ratty, aka the water vole

We run the longest-running water vole recovery project in the UK. Photo by Terry Whittaker/2020VISION

Water voles are Britain’s largest voles, with fully grown adults reaching lengths of 20cm (plus a 12cm tail) and weighing up to 350g. They are charismatic little creatures with a round face, a blunt nose, a short furry tail and glossy dark brown or black fur. Water voles were popularised by the well-known character Ratty in Kenneth Grahame’s ‘Wind in the Willows’, who, despite his misleading name, is not a rat but a water vole.

‘… A brown little face, with whiskers. A grave round face, with the same twinkle in its eye that had first attracted his notice. Small neat ears and thick silky hair. It was the Water Rat!’
Kenneth Grahame, Wind in the Willows

In spite of their name, water voles are not particularly well-adapted to aquatic life. They have evolved to live alongside water to aid their escape from predators. Their characteristic ‘plop’ is the sound of them diving into the water to escape any would be predator and to access the underwater entrance to their burrow. But they are clumsy swimmers without the rudder-like tail or webbed feet evolved by other water-loving creatures. Away from water – and where safe from predation, water voles can live completely fossorial (burrowing) lifestyles and in fact they do in a well-known location in Glasgow!

Water voles live in burrows that they build by biting into the banks with their very strong, enamel-coated orange teeth. These burrows can be very complex and consist of nesting and nursing chambers, with two entrances, one on the bank and one underwater. A water vole burrow is roughly the width of a balled-up fist or a tennis ball. During the winter months, water voles are tolerant of each other and live together in family groups in their burrows; but this all changes in the breeding season, when they become very territorial!

The breeding season begins in April and continues until October. Water voles are extremely successful breeders – they need to be to replenish the numbers lost during winter; when up to 80% of water voles perish, mainly as a result of starvation. Gestation for a female vole is only 23 days! Her babies (pups) leave the nest after three weeks and are themselves able to breed at 15 weeks old. One female water vole can have between five and six litters in a year, with between 3-5 pups per litter, meaning that one female water vole could have 25-30 babies in one breeding season – poor thing! Water voles have a very short lifecycle and don’t usually live for more than one winter.

The breeding season is also the peak time to survey water voles, as the territorial females leave piles of droppings (latrines) to mark the edges of their territories. Finding latrines is the water vole surveyor’s dream! If you think you have water voles in your local patch of rivers or streams, have a look for their latrines, burrows and piles of vegetation or food stores, which are pieces of vegetation measuring between 4-10cm, bitten off with a 45° angle at their tip.

Water voles need to eat up to 80% of their own body weight every day in order to stay healthy. Their diet consists of mainly grasses and waterside plants, as well as twigs, bulbs, roots and fallen fruit. They aren’t too picky and have been recorded feeding on up to 220 different plants. Although they are described as herbivorous, a female feeding young will eat a dead water snail or fish if she comes across one, to boost her protein levels.

Sadly, water voles are one of the UK’s fastest declining mammals. Up to 90% of the population has been lost since the 1970s; part of a longer-term decline stretching back to the Middle Ages. The reasons for this decline include habitat loss and fragmentation (their habitats being broken up into smaller, disconnected chunks). Examples of this include overgrazing and mowing of riverbanks and canalisation of streams.

It is well-known, however, that the American mink is the key driver behind the more recent decline of our water voles. Mink were introduced into the UK in the 1960s after fur farms were closed. In their native home of North America, muskrats form a major part of the mink’s diet; in the UK, there are no muskrats and instead water voles, which resemble muskrats, form a major part of their diet.

Water voles are at the bottom of the food chain, and have a great many predators. They are eaten by otters, buzzards, owls, and foxes to name just a few! But these are all native animals and the water vole can cope with these natural predation pressures by breeding rapidly and escaping into their burrows. However, a female mink is slim enough to follow the water voles into their burrows and predate entire populations.

Fortunately, it’s not too late for the water vole!

Wildlife Trusts across Britain have been working to help water voles recover, restoring their habitats and even reintroducing them to areas where they were once lost.

BBOWT’s Water Vole Recovery Project is the longest standing local project in the UK dedicated to water vole conservation. It works to help the water vole populations across the three counties.

Working in partnership with the Environment Agency, the Canal & River Trust and Thames Water, we have been monitoring water voles, identifying habitat enhancement opportunities and influencing local landowners to manage sites sympathetically for water voles and implement mink control.

Our work has resulted in a continued increase in the known areas of local water vole activity. In 2018 the National Water Vole Mapping Project, to which the project contributes data, suggested water vole presence had declined by 30% between 2006 and 2015 across England and Wales.

By contrast, our known water vole sites have been steadily increasing during this period. In 2008 the total area of water vole activity in the three counties stood at 321km2, this increased by 78% over the last 10 years to reach 603km2 in 2018, which is great news.

BBOWT’s Water Vole Recovery Project is the longest standing local project in the UK dedicated to water vole conservation, working to help the water vole populations in the three counties. 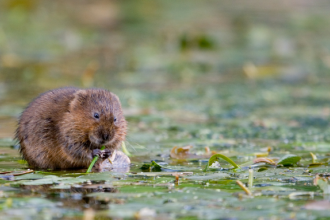 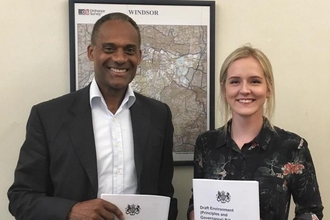 Resources to help you speak up for wildlife and make your campaigning voice heard, and how to become a Wildlife Ambassador.

Let's go on a minibeast hunt

Take a closer look at the tiny creatures all around us. These ten insects can be seen in parks, gardens and green spaces during June, if…

The Seasonal Wardens update on the rare breeding birds at Greenham and Snelsmore Commons, and how they've been working to protect…